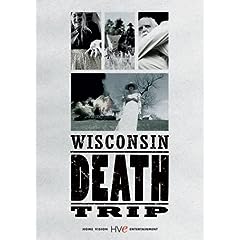 Get Wisconsin Death Trip from Amazon.com

I’m back from my little vacation from blogging, and I’m returning with a review of another documentary – and not one from Frontline or another episode of a PBS program (not that there’s anything wrong with that). With historical documentaries these days, film-makers tend to go either the History Channel route (scenes with reenactors inter-cut with talking heads), or the Ken Burns route (narration and readings of writings from the time with possible scenes of reenactors).Â  This film takes the Ken Burns route, but with different subject matter than the type of material Burns covers.

The documentary covers 1 year in Jackson County, Wisconsin in the 1890s. During which much of the county, particularly the area around the town of Black River Falls, goes more than a little bit mad. The documentary is told through articles in alocal paper in the county, read by Ian Holm.

The use of newspaper articles as a framing device works really well at emphasizing the strangeness of the goings on in the area -Â  when articles about deaths, murders and suicides are more common than birth announcements and announcements of other local events.

While the segments which take a look at Black River Falls in the modern day provide a nice break from the doom and gloom in the past, it ultimately feels out of place – particularly considering that the events in question happened in an area wider than the town.

I can’t help but feel that for some reason the directors are guilty of the error of omission here, by possibly mis-representing the amount of grotesque and macabre events in the era, and making them appear more common than the more mundane events.

The documentary makes for an interesting curiosity. However, I can’t find reason to justify doing more than renting the documentary – certainly not purchasing it.