Presumably at some point Phillyman will find a better blog entry to feature on the front page than mine about why I care about old magazines and it will no longer be featured so prominantly. Since this is a sort of follow-up to the original entry, I thought I'd better make sure that I pointed to the original which can be found right under this rock here. While it is a follow-up, it's not a direct sequel, and you can easily read this entry without having read the other. I just love shameless self-promotion. Go on, give me the views I so desire.

With that out of the way, let's turn to the meat of the posting, which is about another gaming magazine, but not one focused on video games. This time, we're pre-dating most home consoles and looking at one of the single greatest investments that I (or rather my mother, considering it was a present) made in my lifetime. It is fair to say that without knowing of this product's existance, the idea of scanning or owning digital copies of old magazines might never have occured to me. Leave it to TSR and Wizards of the Coast to open my eyes to some new magic yet again. 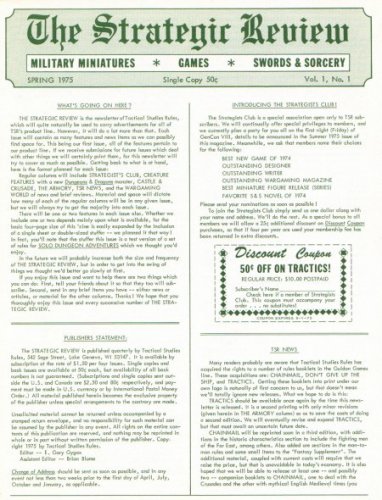 Once upon a time, a long, long time ago, two guys named Gary Gygax and Dave Arneson (both now deceased, unfortunately) got together and created a little fantasy gaming experiment that they introduced to the world in 1974. Published by Tactical Studies Rules, Inc. (or TSR), the game went on to become a sensation with followers even today numbering in the millions worldwide. Dungeons & Dragons set the world ablaze as a way for normal 9-5 Joes and Janes to go from reading about the exploits of heroes like Gandalf, the Grey Mouser, and Conan the Barbarian, to creating entirely new stories starring their own fictional personas. It was a hit, and in 1975, TSR began publication of a quarterly newsletter devoted to D&D, wargaming, and miniatures called "The Strategic Review". Strategic Review didn't last terribly long, running only seven issues, but it didn't fail. Instead, in June of 1976, it was folded over into a brand new publication from TSR known simply as "The Dragon" and a smaller sister publication devoted specifically to miniature wargamers called "Little Wars". 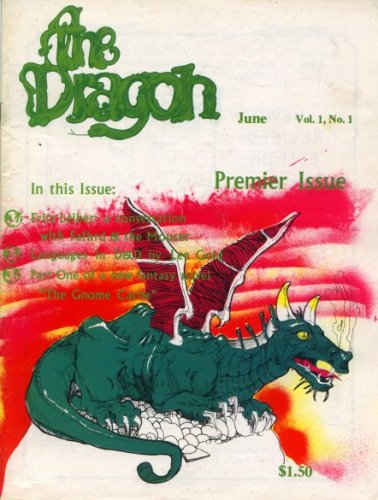 The Dragon was created to be the premiere fantasy and wargames-related periodical, directed towards hardcore enthusiasts and wet-behind-the-ears novices alike. And while it was published by TSR as a sort of house organ, The Dragon didn't hesitate to publish reviews, rules enhancements, and advertisements for other gaming companies or systems. And it wasn't uncommon for D&D co-author Gary Gygax himself to contribute content, editorials, rebuttals, reviews and other bits of info in the early issues. What started as a simple newsletter and evolved into a 30-page bimonthly magazine gradually grew to a monthly glossy-paged sort of catch-all for players of all flavours of D&D, Advanced D&D, and every campaign setting across multiple complete rules updates and two changes of publisher for a total of 359 issues before Wizards of the Coast pulled the plug on the printed magazine in September of 2007, continuing it in a limited form of digital distribution that, while interesting, just wasn't quite the same.

But let's back up a moment. It isn't 2010 but 1999. And Wizards of the Coast, who purchased TSR lock, stock and barrel just a few years earlier, decides that it's time to give people access to all those long sold-out and out-of-print issues of Dragon. And to that end, they release the Dragon Magazine Archive. For $50, you got five CDs containing scanned PDF-format issues of the first 250 Dragon magazines as well as all seven issues of The Strategic Review; all the covers, all the ads, all the articles...all of them are OCR'd and the program comes with a fully-searchable index based on keywords in article titles or body text that will take you straight to the issue and page number featuring the content you were looking for. Being an enormous D&D geek, as soon as I saw it, I asked for it as a present, and I got it for my birthday. As luck would have it, it was a good thing I did, because it didn't take long for Wizards of the Coast to get into some serious hassles with the reprint rights for all the different articles, cartoons, editorials, maps and artwork that were contained in the archive. It went out of print very quickly, and now commands an obscenely high price (used ones will routinely go for $150 or more; brand new ones can top the $300 mark). But this was my very first experience with the concept of a digitally-archived version of a magazine. And what an eye-opener! 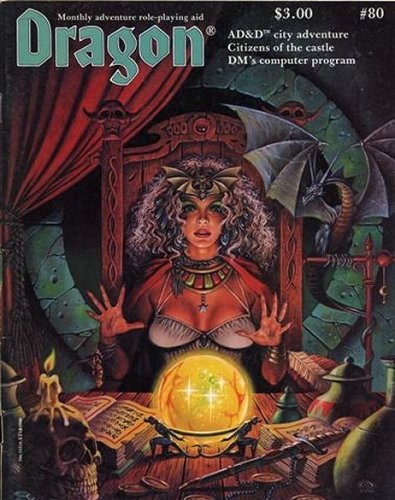 I collect Dragon (and its sister publication, Dungeon), but this just seemed unreal. I could literally browse through twenty-five years worth of content right on my hard drive, compile a bookmark listing of my favorite articles, even cut and paste text into Word so I could print it out if I wanted to. Issues that I swore I'd never read in my lifetime (the earliest issues of Dragon had such small print runs that they command very high prices even today) were suddenly made readily available to my greedy little mind. Of all my gaming-related items, this is one of my most prized treasures for all it contains. 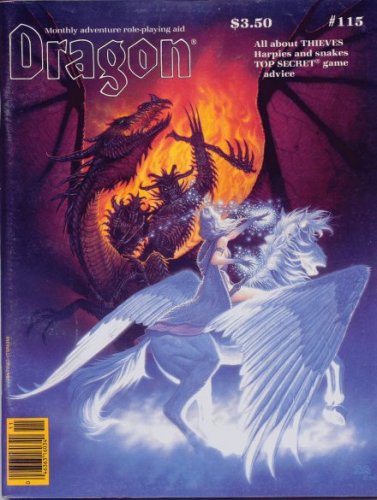 So, why read old issues of Dragon? Like anything else, for its history. Many of the people who were big-name designers in 1999, like Jim Ward, Monte Cook, Len Lakofka and Ed Greenwood basically got their start writing for Dragon. Artists like Larry Elmore, Boris Vallejo, Jeff Easley, Clyde Caldwell, Jim Holloway, Phil Foglio, and Denis Beauvais contributed covers and interior artwork which was some of their earliest exposure. It's absolutely fascinating watching the magazine grow through its initial pains of the UPS strike, problems with the cost of printing materials, and a procession of editors starting with Tim Kask and ending with Dave Gross (who was editing on issue 250; there were more editors after Gross, but we're only concerned with the ones presented in the Archive itself here). Many ideas taken in by later editions, including how magic worked, the idea of specializations with weapons, and a variety of new PC and NPC classes came about first from the pages of Dragon before being officially incorporated into the new rulesets. Dragon reviewed other RPGs and advertised play-by-mail games that are long defunct in the twenty-first century. It published fiction and short stories by such Fantasy industry luminaries as L. Sprague deCamp, Gardner Fox, Fritz Leiber, and George R. R. Martin, as well as other amateur writers who were making their first (and sometimes only) sales of their careers, including a one-shot anthology called "Dragontales" featuring nothing but short, fantasy-themed fiction. 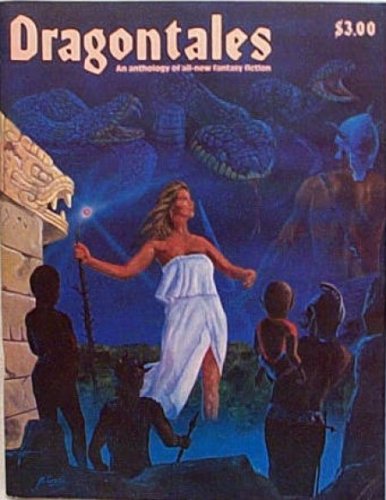 When personal computers began to become a staple of everyday life and began receiving RPGs of their own, Dragon added a column entitled "The Role of Computers," offering reviews and hints for RPGs that could be played without a flesh-and-blood Dungeon Master. A special Forum was opened up for reader discussion and debate on anything pertaining to the FRPG genre, including previous articles. Errata was often printed in the pages of the magazine, allowing players to fix broken rules or update charts with mistakes on them that hadn't been corrected prior to going to press. There were features on painting miniatures, the best way to prepare for an outdoor adventure, generating random dungeons with personality, in-depth looks at various creatures of the D&D world, suggestions for DMs on how to portray memorable non-playable characters (NPCs), speculations on what would happen if gunpowder were introduced into a campaign, special supplements for the game like an actual "Deck of Many Things" artifact or poster maps of the world, short printed adventures, and even full-fledged boardgames printed on cardstock and stapled into the binding, many the product of veteran game designer Tom Wham. Comics such as "Knights of the Dinner Table" and "Order of the Stick" have been featured within its pages. If you were any kind of gamer, Dragon had it all. 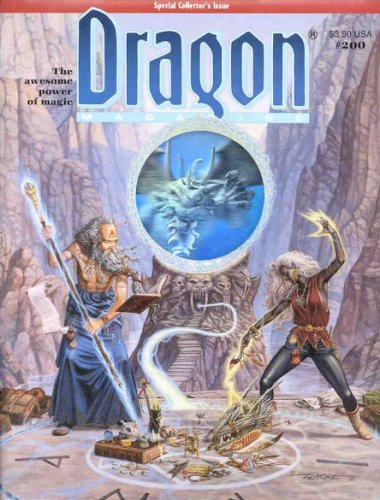 So all the way back in 1999, I was starting to realize the feasibility and desirability of complete digital archives of products with such enormous amounts of back-history. Wizards once again worked their magic, and I fell in love with the idea of the PDF magazine. I started to realize what a boon such an offering would be to comic collectors, or enthusiasts of other magazines, to be able to store entire boxes of information on a single disc, and I saw the future. Today, perhaps that future is very much embodied in the fact that you can find full or partial archives of such magazines as Rolling Stone, National Geographic, Mad Magazine, Time, the Harvard Lampoon, and compilations of comic books featuring the likes of the Incredible Hulk, Spider-Man, Iron Man, the X-Men, and Captain America all for sale. Playboy has compiled a complete digital archive of their Magazine Covers. And now, Retromags has collections of all manner of microcomputer, PC, and console-related gaming magazine content available. I may have found a piece of heaven in 1999, but ten years later, the skies are the limit, and history seems to be in good hands. What will 2019 bring in terms of new ways to preserve our past? I've no idea, but I can't wait to find out.