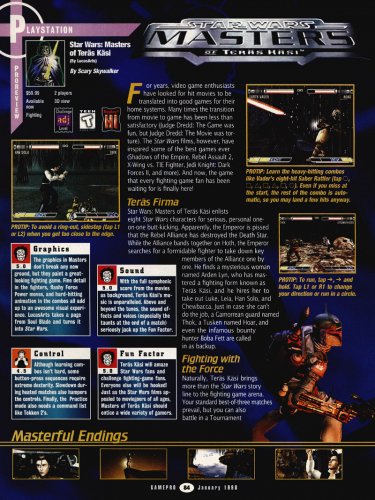 In the days before the Internet started shoving a cruel, pointed stake into the hearts of video game magazines, we had no choice but to trust the reviewers who got paid to do what we all wished we could get paid to do: play lots of video games and then write about it.

The guys and gals of the gaming journalism world were supposed to be our lifelines, making sure we didn't buy the crap and didn't miss the gold. Usually they were on the money. But sometimes...well, deadlines can do strange things to writers. Sometimes they drop the ball.

Golden example: everybody open the image to your left, taken from the January 1998 issue of GamePro. Try not to scream.

Yeah, that's an effective 9.75 out of 10 score for none other than Star Wars: Masters of Teräs Käsi, one of the absolute worst Star Wars games ever released.

Minor Trivia: MoTK is incorrectly named, as the only actual practitioner of the Teräs Käsi combat form is Arden Lyn. The game's proper name, as shown in the opening story credit crawl, is really 'A Master of Teräs Käsi.' When you can't even get the name of the game correct on your own packaging...*sigh*

Now I'm all for believing that everyone is entitled to her own opinion, and maybe Scary Larry (err, sorry, 'Scary Skywalker') just really, really thought MoTK was the bomb. But I also believe in balance. Surely he wasn't the only editor in the GamePro offices playing this title, even if he was the one who got to write the review. Was no one else consulted on this? Was the build of the game he played somehow substantially better than the finalized version? We may never know.

Just to compare, here are the scores from a number of other contemporary review sites and magazines (scores converted to a 10-point scale for sake of comparison):

Notice what all of these reviews have in common? They all rank Teräs Käsi as a "poor to average" title, which is even more generous than I'd be with this steaming pile of Bantha poodoo, but none of them is in the same galaxy far, far away as Larry.

Now if the review actually backed up those numbers, I'd say that's just the way the cookie crumbles. But Larry's own review serves to render his numerical ratings completely meaningless.

Graphics are such a personal choice that rating them alone is almost meaningless. Teräs Käsi looks fine for a PS1 game; it's not a 5/5 for me, but hey, different strokes (Larry himself acknowledges they don't break any new ground). Doesn't affect the gameplay one bit really, so I don't care. Likewise, you know a CD-based Star Wars game is going to have awesome audio since it's got the full backing of John Williams' iconic score and Ben Burtt's instantly-recognizable sound design for blasters, lightsabers and TIE fighters. So go ahead, let's just give it the benefit of the doubt and give it those 10 easy points.

Because the next rating is Control, and Larry, I feel the conflict within you. You give it a 4.5, but then say this: "Slowdown during heated matches also hampers the controls." OK, that's it, cut in the sub-light engines. Everybody, out of the Y-Wing. Sometimes you can live with a modicum of slowdown here or there, but one genre above all others requires an ABSOLUTELY steady frame rate at all times, and that's the one-on-one fighting game. In a fighting game, slowdown equals death, pure and simple. When "slowdown [...] hampers the controls" of a fighting game that's it. Game over. You don't get a near-perfect score for control. You don't get a 4, or a 3, or a 2, or a 1, or even a .5. You get a ZERO. You're Porkins at the Battle of Yavin. Thanks for nothing, airman.

Which brings us to Fun Factor. Once again, when "slowdown [...] hampers the controls" of a fighting game, you don't get a perfect score for Fun Factor. You get a big fat zilch. You're Admiral Ozzel at the Battle of Hoth, as clumsy as you are stupid. Larry's correct when he writes "Masters of Teräs Käsi should entice a wide variety of gamers." Unfortunately it enticed them to let the hate flow through them, which probably isn't what he meant.

So, what did Scary Larry leave out of this review? How about lightsabers that behave more like Gaffi sticks, blasters that need time to charge up before firing, small fighting stages that make cheap "Ring Out" victories more common than actual KOs, AI that waffles between amazingly competent (busting out 7-8 hit combos with no problem) and amazingly stupid (running a circle around behind your character only to fall off the stage and hand you a win), terrible character balance (Jedi and Sith stomp all over their mundane opponents which makes sense, but doesn't make for a very compelling reason to play Han or Chewie), a storyline that makes no sense even within the Expanded Universe canon (so the Emperor sends Darth Vader, Arden Lyn, Mara Jade, Boba Fett, a Stormtrooper, a Tusken Raider[WTF?] and a Gamorrean Guard[WTF?!] to hunt down Luke Skywalker, Princess Leia [both in a bikini and bounty hunter costume because shut up, that's why!], Han Solo, Chewbacca and a random bounty hunter named Jodo Kast...but it takes place between A New Hope and Empire Strikes Back, so there's no reason for them to be fighting on Endor, Cloud City, Dagobah, Jabba's palace, the Emperor's throne room, or Hoth; Leia won't be disguised as a bounty hunter or enslaved to Jabba for another three years; Luke hasn't built his green lightsaber, trained as a Jedi or lost his hand to Vader yet but he's in his one-gloved RotJ costume...sorry, I can't go on), zero reward for beating the game (expect a 3-second video clip at best...some characters like the poor Stormtrooper don't even have endings) except for some unlockable characters for doing it on Jedi difficulty with particular fighters.

Which game was he playing, exactly?

Thankfully I experienced Teräs Käsi as a rental at someone else's house and thus never made the horrifying discovery that I'd bought a turd. I can only assume there were GamePro readers who didn't share my luck.

Have you ever been misled by a game magazine's review into purchasing something that turned out to be a dud (or on the other hand, ever been led away from a game given a bad review only to discover years later that you actually enjoyed it?) I'd like to hear about it either in the comments section or on the forums.