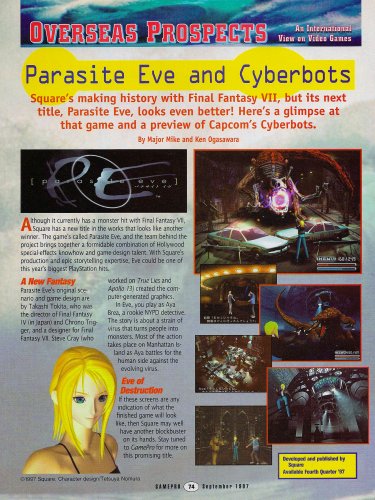 I frigging love Parasite Eve for the Playstation. It's one of my favorite RPGs of all time (small wonder, since it's written and directed by the guy who directed Chrono Trigger and designed Final Fantasy IV on the Super NES, and scored by Yoko Shimomura who did the music for Breath of Fire, Kingdom Hearts, many incarnations of Street Fighter II, and Legend of Mana among others), and I've felt it never received the recognition it deserved coming as it did in the wake of Final Fantasy VII and being set in modern-day New York with a science fiction theme.

One of the things I enjoy about older game magazines is looking through their previews for games and seeing the changes they underwent before going gold. And since a couple of my previous blogs have been poking fun at GamePro, I figured I could balance that out by writing something nice so people don't get the impression I hated them.

So, right here, we've got a one-page preview from the Sept. 1997 issue of GamePro showcasing Squaresoft's upcoming release of (yay!) Parasite Eve!

What I love so much about this is that none of the pictures that you see, save for one, are scenes that actually appear in the game. Rather they are amalgamations of elements put together for the purpose of giving a sense of what the game will look like. They're also at a much higher resolution than the final game elements, which means they're probably being shown on a development computer.

Starting at the top and going down, we have the following:

1 - Aya fighting with the animated skeleton of a T-Rex. While this happens in the game, it takes place in the Museum of Natural History, not out on the city streets. That backdrop depicting the police barriers and cop cars is used during a single cut-scene where Dr. Maeda is introduced. No rampaging dinosaurs to be found.

2 - Aya and Dr. Maeda having a conversation in Carnegie Hall. Aya and Maeda do talk several times throughout the game, but Carnegie Hall is seen only in the first chapter of the game where it practically burns to the ground, and in the game's "bad" ending which you automatically get on your first play-through. The pair talk outside of Carnegie Hall, but this specific camera angle isn't used in the game.

3 - Aya fighting the mutated alligator. This set actually does appear in the game in a slightly modified architectural format as the sewer system below Carnegie Hall. The mutant alligator shown here looks nothing at all like the final version in the game (which completely lacks eyes and spits electricity). Also at this point in the game, Aya's still dressed in her evening gown, not jeans and a leather jacket. She also doesn't fight the alligator on this part of the set, but rather in the more confined tunnels further back.

4 - Aya and Daniel in the precinct. This is the only set shown in these pictures that looks exactly like it does in the game. There are usually a couple of other detectives (Nix and Warner) who hang out in this area, but chances are their models weren't completed yet.

5 - Another look at Aya in the sewers from a different angle. Again, with some modifications, this set actually appears in the game but Aya's attire at this point is her evening gown, not her typical detective outfit. Aya visits another sewer later on in the game dressed this way, but the set used is far more industrial in nature as opposed to the artistic architecture showcased in the first sewer sequence.

6 - Daniel, Aya and Maeda all talking on the Brooklyn Bridge. This particular set is used during a cinema sequence depicting the evacuation of New York, and can't be visited during the game itself. There are numerous times the three converse, but it's generally either in Precinct 17 or the Museum of Natural History.

They get the release date wrong (it doesn't come out in Japan until March of 1998, and we don't see it until September of that same year), but since release dates change constantly this isn't a mistake on GamePro's part; they can only print what they're told, after all.

So, why read old game magazines? To see stuff like this, of course!