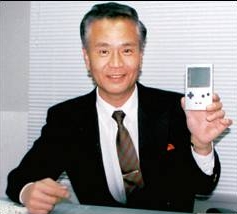 Many things we take for granted in the gaming world today can be tracked back to this man, including the cross-shaped directional pad (NES), portable gaming systems (Game Boy), and Metroid (every freakin' Nintendo system except the N64).

Not bad for a janitor.

Yokoi was a simple custodial worker and maintenance man at one of Nintendo's hanafuda (playing card) manufacturing plants, where he amused himself in his spare time by tinkering and building gadgets. One of these toys, a sort of extendable grasping claw arm, was seen by Nintendo's president Hiroshi Yamauchi during a visit to the factory. Fascinated with the idea, Yamauchi asked Yokoi if he could develop the idea further into a sellable product. Yokoi agreed, and the Ultra Hand was born.

It was 1966, and Nintendo sold over a million of them to Japanese children. Impressed with Yokoi's ability to innovate, Yamauchi asked him to create some more toys for Nintendo. He did so, and thus from humble beginnings rose one of the greatest video game innovators of the twentieth century.

Yokoi came up with the idea for the Game & Watch as a way for bored businessmen to kill some time while waiting between meetings or while riding the trains to and from work. He advised a struggling Shigeru Miyamoto in game design theory to help him develop the game that would eventually become Donkey Kong and the franchise-launching Mario Bros.

From there, he helped produce the now-legendary Metroid on the NES, followed that up as project director for Kid Icarus, then came up with this little-known doo-dad called the Game Boy. Thanks to Yokoi, Nintendo has dominated the portable console market for more than twenty years, laughing at every would-be challenger who tries to dethrone them.

In other words, if you've played or enjoyed a video game since 1985, chances are you owe a Mother Brain-sized debt of respect to this man.

He resigned from Nintendo to start his own company in 1996 following the failure of a Virtual Boy system which was rushed to market too early and priced far too high to appeal to a broad consumer base. While they unveiled the Nintendo 64 at the Shoshinkai Software Exhibition in November of 1995, Yokoi was placed in a far-off corner of the trade show to demo games on the Virtual Boy. Needless to say, he was all but ignored by the attendees who were far more interested in Nintendo's forthcoming "Ultra Famicom". I think at that point, I'd have chosen to retire as well.

Tragically, Yokoi was killed on October 4, 1997 when he was struck on the highway after getting out of his own vehicle to ascertain damage sustained in a collision with another car. Although rushed to the hospital, he died roughly two hours later. And the world lost a great innovator who in many respects never stopped being that humble custodian from 1966.

Nintendo's American president, Howard Lincoln, said of Yokoi, "He had a great sense of humor, a great smile...a very generous and outgoing fellow. He made a tremendous amount of creative contributions to Nintendo and the video game business over the years. People play Game Boy all over the world, and that's Mr. Yokoi's." And all you have to do is look at his picture up there to know Lincoln was right.

Like so many of the people who have inspired me over the years, I never got the opportunity to meet Gunpei Yokoi. Given the above remark by Mr. Lincoln, all I can think is how sorry I am that he's gone. When you can miss somebody whom you've never even met...well, I think that says something.

Arigato gozaimasu, Yokoi-san. I hope one day we can share tea together.