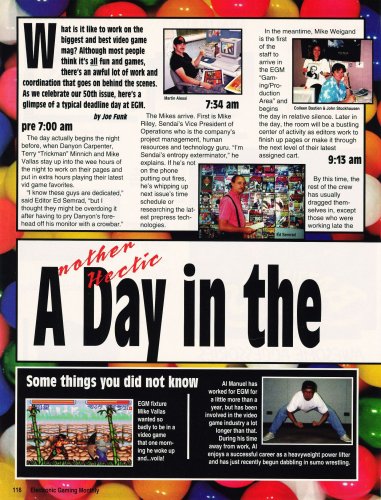 Every so often, the magazines from back in the day would give us a peek behind the scenes so that the rest of us would know (or at least have a vaguely better idea) what those weirdos whose names all appeared on the masthead at the front of the magazine did for the magazine besides the obvious.

So for their 50th issue, EGM treated us to a four-page spread of insider information, Photoshopped antics, personal photos, and other goodies. In case it's not obvious, this is one of the best reasons to collect and preserve these magazines. Information on the games they covered is ubiquitous today, but this stuff is not.

If you need a better reason, then how about the fact that Review Crew guru Martin Alessi is a member of none other than these very forums? This guy's been there, done that, and owns several dozen tractor trailer loads of t-shirts to prove it.

What I wouldn't give for a blog of memories from HIM here (hint, hint, Mr. Alessi, if you're reading...)

In fact, let's just say that we've got a lot more pictures than the ones posted above (which the Gallery decided to run right-to-left instead of left-to-right, because screw me, that's why...*sigh*) featuring the good gentleman. Digging the 'stache yet? There's more where that came from. Threats? Me? Oh no, just reporting the facts, ladies and gents.