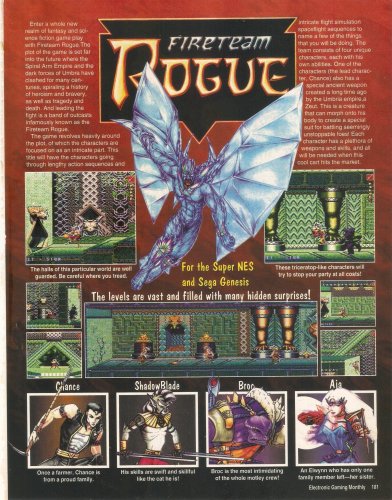 Digging through the collection, I unearthed this gem discussing a really awesome-looking game being developed by Accolade for the Genesis and Super Nintendo. I'm pretty familiar with the bulk of the Super Nintendo library, but I didn't remember ever seeing this title on the market. Was it yet another unreleased game previewed by EGM, this time in their January, 1994 issue?

A quick trip to GameFaqs confirmed my suspicions: Fireteam Rogue was in development in the mid-90s and then axed before completion. Another quick trip, this time to Google, loaded me down with plenty of information on this gem, making me wish like anything it had been finished.

At first glance, Fireteam Rogue sounds more like a tech demo than anything else. Using various data and graphical compression algorithms, Accolade was proposing to take a 40MB game and stuff it into a 2MB game cart. Insane? Possibly. But just imagine if they'd managed to pull it off.

Accolade was promising 100 hours of gameplay experiences, including side-scrolling action levels and Mode 7 shooting stages. Evan G. (with the help of some credited scans from Retromags!) put together a slew of awesome information over at SNES Central that's well worth reading as opposed to having me just rehash it here including a number of screenshots. In addition, he's got two different alpha prototypes of the SNES version available for download, a link to the comic book Accolade put together to support this game, commentary from a couple people involved in its development, and a variety of FAQ sheets, handouts, letters and other goodies for perusal.

In the end, like so many other unreleased games (and sometimes even ones that do make it to market), it seems like this one came down to too much time and money spent on hype and too little time and energy devoted to development. The important thing is even though it wasn't released, it wasn't forgotten either. And who knows--maybe in the future, we'll see a more complete version and can be better equipped to judge for ourselves just how great a loss the gaming world suffered for its lack.

Until then? Well, we'll just have to keep digging through the archives. I hope you'll keep searching with me.