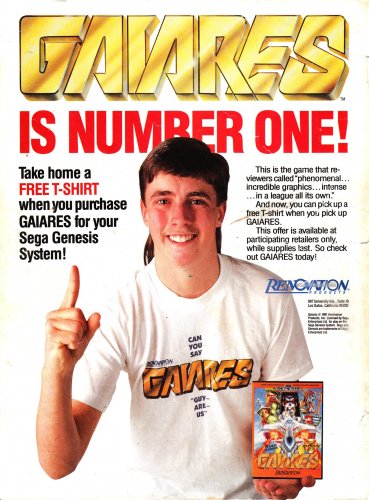 One of the best things about flipping through old magazines is, of course, the ads. Doesn't matter whether you're looking at EGM or National Geographic, the ads always hold up a mirror to the culture of the time period. Advertisers know that twenty years later, neither anyone's going to care about the way an ad looks, nor will they be mocked for it by future-dwelling homo sapiens.

Because of the internet, they're also wrong.

Video game ads don't often approach this level of hilarity, but my lord, just take a look at Captain Mullet here mugging for Gaiares on the Sega Genesis. Nowadays, this sort of thing would be a pre-order bonus from Amazon.com or GameStop, but back in the day you didn't pre-order games, you just showed up and bought them whenever the hell they came out. Sometimes retailers like Sears or Babbage's would pay to get some promotional content they could give away in the hopes of getting customers into their stores. Sometimes this stuff was neat.

Other times...well, let's just say wearing this shirt to school would have ensured two things. First, you were definitely not going to get that girl to notice you. Second, you were going to get the mother of all wedgies.

There's good geek cred and bad geek cred. Good geek cred back then (September of 1991, when this ad ran in GamePro) would have been owning the Genesis. Bad geek cred: wearing this shirt in public. Advertising hint: if you feel the need to explain how to properly pronounce the name of your product (and you aren't a manufacturer of pharmaceuticals), come up with a new name.

It's probably a collector's item these days (the game's no slouch in that department either). Just...if you're going to wear it, please have the decency to sport a proper hairdo. Oh, and Nair your upper lip too. The dirt 'stache is so 1989...