Often when a game is ported from one region of the world to another, significant changes are made, not least of which is usually an attempt to translate and localize the game for a new audience. Sometimes things are removed or altered for sociological reasons; a rather famous example is the graphical changes that accompanied Final Fantasy IV and Final Fantasy VI for the Super NES thanks to Nintendo of America's stricter policy on drinking and sexual themes in their games as compared to Nintendo of Japan. This was the case in Final Fantasy VI where the "Siren" esper was given some pants to cover up her bottom, and the signs reading "Pub" were changed to "Cafe". Final Fantasy IV saw the loss of the hidden Developer's Room in its US release, as well as a large number of items, spells and abilities being "dummied" out and the difficulty toned down to make the game more palatable to an American audience that was assumed by the Japanese to not enjoy challenging titles.

Sometimes things are cut for reasons of space; an awful lot of RPGs in the 8-bit and 16-bit eras lost an enormous amount of text in the conversion from Japanese to English, and in some cases as much as 1/3rd of a game's script was utterly lost due to insufficient memory on the cartridges. Differences in console hardware often necessitate cuts and changes in games as well, with a prime example of this being Contra on the NES vs. Contra on the Famicom.

In the Japanese Famicom Contra cartridge sits the VRC2 Memory Management Controller (MMC), which was an additional chip used to provide extra oomph to the system while playing the game. Because of this extra chip, the Famicom version of Contra includes a map of the game and the players' progress that is displayed at the start of each level, a number of between-level cut-scenes including an extended ending, and extra visual effects on some levels (swaying trees on the first level, and falling snow in the fifth). To wit: 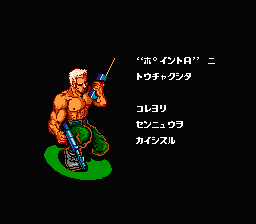 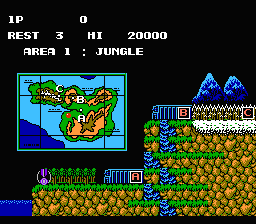 The NES version of Contra did not ship with this chip installed to save money, so the game omits these little bonuses.

Other times, stuff is removed from games for different space-related reasons. The downloadable version of Castlevania: Symphony of the Night on the Xbox 360 fell victim to this when Konami decided to strip out all the FMV from the game in order to shave roughly 25 megabytes off the total size of the download. For some reason, this was only done in the American release; the Japanese version retains them. Also inexplicably, the US version was patched after its initial release to remove the ending credits song "I Am The Wind". It was replaced by the ending theme from the PS2 title, Castlevania: Lament of Innocence. Presumably, this was done in order to avoid having to pay royalties to Cynthia Harrell who provided the vocals on "I Am The Wind".

Symphony of the Night also receives cuts between versions from its original release. In what could only be called a bizarre happenstance, Konami actually took the pains to re-record a version of a Japanese song with new English lyrics, only to then remove from the game the ability for players to hear this track by removing the familiar that triggered the effect (sitting in a chair with the Sprite familiar active caused her to sing the song "Nocturne" to you; this can be done in the Japanese version but cannot be triggered in the American release because the Sprite and Nose Demon familiars were excised from the game). The Sega Saturn port featured new musical compositions and areas to explore, as well as the ability to play as Maria in a subsequent playthrough. And the PSP version that can be unlocked in "Castlevania: The Dracula X Chronicles" includes the ability to play as Maria and returns the Sprite and Nose Demon familiars to the game, but replaces the ending theme with a different song entitled "Serenade of Sympathy". In addition to these changes, the game's entire script was re-translated and new voice actors and actresses were hired to read the lines.

Have a listen to the music that we in North America missed out on with the removal of the Sprite:

Note that it isn't always non-Asian releases that miss out on things. When Squaresoft released Final Fantasy VII in the US, it featured some gameplay updates (most notably the presence of arrows denoting exits on the overhead maps and the inclusion of the Uber-boss-class Ruby and Emerald Weapons), a cranked-up difficulty, and a lower encounter rate for random battles as well as additional FMV sequences that were not in the original Japanese release. This caused some consternation back in the Land of the Rising Sun, and prompted a re-release of the game under the title "Final Fantasy VII International".

Naturally, all this is just scratching the surface of what has been an ongoing issue with video games for over twenty years. So the next time you sit down to play an old favorite, take some time afterwards to do a little research or track down the original if that's feasible. You might be surprised to discover some stuff about that classic title that you never knew before.