I will level with you by starting this blog with the caveat that I am in an incredibly foul mood at the moment. But rather than doing something constructive with my rage, like tossing small children into deep wells or drugging really ugly men at the bar and leaving them in my neighbor's front yard without their clothing again, I decided I might be better served (and avoid inconveniences like court dates and prison sentences) to compile a list of horrible Star Wars games. I'm aware that this is something akin to both a blogger's rite of passage in making silly lists about truly inane topics and taking a shotgun to your uncle's fish tank and being amazed that it was impossible to miss, but tough luck. If you want a more unique topic, go read a better blog and don't let the Cascading Style Sheets hit your ass on the way out.

Now that I've completely alienated 97% of my potential readers, the two of you who remain are in for a rambling, pointless list of a blog where I run down games that have been run down everywhere else in print and online since before George Lucas was even born (there was a slight malfunction with a time machine, an Atari 2600, and the New York Post which I am not at liberty to discuss until 2060). Please accept my apologies, keep all arms and legs inside of the AT-AT walker at-at all times, and pay no attention to the man in the black mask who appears to have a breathing problem as he's been lurking about here for weeks now pretending he's making a one-sided obscene phone call. 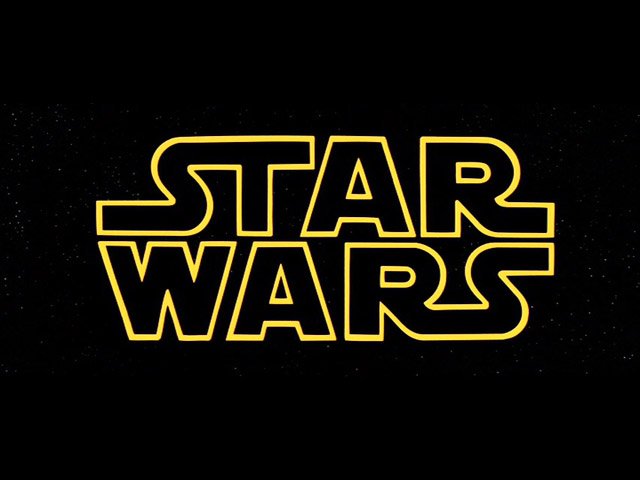 Star Wars, as we all know, is one of the single largest movie franchises in history, and the success of its 1977 theatrical release guaranteed that George Lucas received his own printing press from the US Mint and the authority to use it as he saw fit. Not content with only having two licenses to print money, Lucas very gamely used his merchandising rights to allow companies to pay him for permission to play in his sandbox, and thus were born a wide variety of Star Wars titles, starting with Parker Brothers own "Empire Strikes Back" game on the 2600, which managed to not suck at all, meaning that things could only go downhill from there.

Now unlike many other blogs of this type, I'm not going to turn this into a "top whatever" list because quite frankly I cannot be bothered to rank games in order of suckitude (except for Masters of Teras Kasi, which is utter Bantha poodoo in any galaxy), so much like Han Solo in the real version of A New Hope, I am going to simply begin shooting whatever I damn well please and only apologize about the mess as I'm walking out the door. 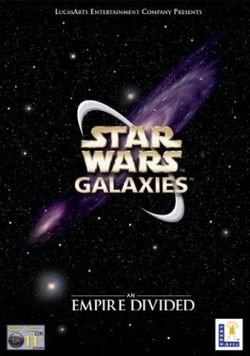 Look over there! It's Star Wars Galaxies! No, wait, you don't have to worry, it's been forcibly castrated, had its innards replaced with a bunch of RROD'd Xbox 360s, and reassembled to look like the podrace stadium from Episode I after the crowds had left and the poor clean-up crew was saddled with disposing of all the beer cans, snack wrappers and mangled Rodian corpses. Star Wars Galaxies is what you get when you take a perfectly good idea (ie: "Let's make a massively multiplayer online game based in the Star Wars universe!") and proceed to beat it with a garden hose until it puts the lotion on its skin without you even asking. The concept was solid, the graphics were decent enough, and it featured all the music you could hear just by playing the much cheaper film score. Really, all you needed was to re-skin Everquest with a space theme and you were nine-tenths of the way there. But then Sony for some reason decided that letting players play the kinds of characters they wanted to play was a bad idea, and proceeded to spend the next two years utterly destroying everything that people had gained so much weight and cut so many classes to accomplish. Suddenly, everybody could be a Jedi, concepts of "good" and "evil" lost their meanings entirely, and new content was taking longer and longer to arrive. If the idea was to allow people to live in the Star Wars universe, it was probably pretty accurate. The problem was that players were thinking "Luke Skywalker" while the developers were clearly thinking "Owen Lars," and despite a number of expansions that introduced things like space combat (rather problematic when your game entitled "Star Wars" doesn't include any sort of fighting among those stars without paying extra for it), it didn't take long before the servers began to resemble the Jundland Wastes except that in this case, players were not travelling them lightly, they were not travelling them at all. 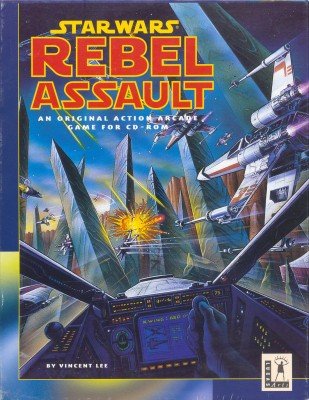 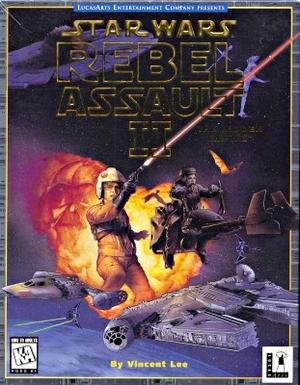 As we proceed down the corridor, I shall now direct your gaze to the left, where you will see the crashed and burnt husks of the acting careers of the C-level would-be stars of the Rebel Assault series. In all honesty, if you're going to blame anyone for this headache, blame Sega because of their complete and utter dedication to making certain that no titles were released on their CD system without a handful of grainy, basement-production level full-motion video sequences inserted into the game at times that were clearly chosen by rolling a bunch of dice, ignoring the results, and taking the whole crew out to get plastered during lunch breaks (which judging by the production values, were offered about every 90 minutes or so). Now to be even more honest, you have to shoulder your share of the blame as well, because if all of you scruffy-looking Nerf herders hadn't ignored the warnings of every magazine reviewer in the world and bought the thing, we wouldn't have had to suffer through part two. Rebel Assault's problem is that it has absolutely no idea what it wants to be, combining elements of lightgun games, corridor shooters, flight simulators and point-and-click adventure titles into a sort of Frankenstein's monster that is composed of nothing but assholes and Wampa teeth. Sure it looks like the dopiest thing in the world, but it will chew off your neck and shit down your head if you get within five feet of it, and everyone else will point and laugh at your misfortune. 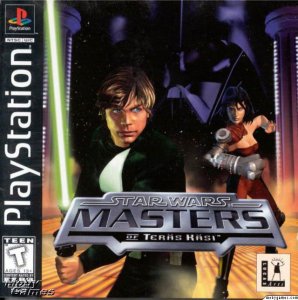 Turning away from the carnage at hand, I can safely say that you have never played Masters of Teras Kasi, and I know this because everyone who has had the misfortune of sticking it into their Playstation consoles was rounded up and forcibly lobotomized so they could live with themselves after suffering such acute trauma. The only proof we have that this game actually existed are some screenshots that can still be found in the magazine archives here at Retromags, and the copious notes taken by psychiatrists who were hired to deal with the increase in mental health issues following the release of this game that wanted to be Street Fighter II but forgot that Street Fighter II was fast-moving, fun to play, and had excellent controls. They don't even have the decency to provide you a way to get Arden Lyn out of her clothing, so you can't fall back on polygonal porn to get you through this steaming pile of Tauntaun entrails. And you thought they smelled bad on the outside. 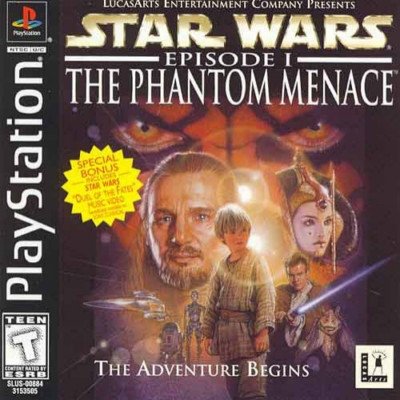 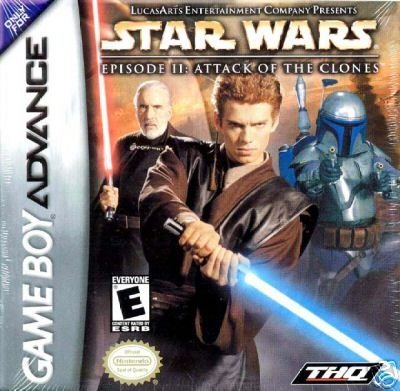 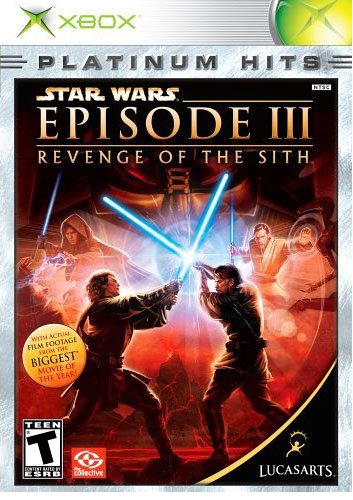 Marching along, you will soon find yourself face to face with an entire bevy of titles based on the prequel trilogy. Rather than subject you to them one at a time like an IT-O Interrogator Droid would, I shall take a page from a slightly older history book and merely shoot you in the face with all of them at the same time like HK-47. Veiled Threat: Unless you would prefer me to do both. Part of the problem is that The Phantom Menace was released solely on the PS1 (and yes, there was a PC version, but it was the exact same game), Attack of the Clones was only released on the Game Boy Advance (a decision I hope resulted in a long sentence in the Kessel spice mines for whoever thought that was a good idea) while Revenge of the Sith was released on virtually every system known to man. Releasing a trilogy of games that requires the would-be gamer to own a multitude of competing systems to experience them all is really poor marketing, but the cardinal sin of these titles is that they make being a Jedi seem like the most mind-numbing job in the entire galaxy. If Obi-Wan Kenobi controlled himself in the films the way he behaves in these games, his first encounter with the battle droids on the Neimoidian ship would have been his last, and Ewan McGregor would have been back on the junk before you could say "Trainspotting II." At least Episode I Racer (the one on Nintendo 64, not that awful "Super Bombad Racing" Mario Kart wannabe) had the courtesy to be somewhat enjoyable to anyone with more intelligence than your average Ewok, but considering that it was a video game based on a film version of what was basically a video game sequence to begin with, this isn't half surprising. While the odds of successfully navigating an asteroid field are approximately 3,720 to 1, the odds of you enjoying any of the games based on playing through the plotlines of these films are quantifiable even without an easily-accessible protocol droid: none at all. 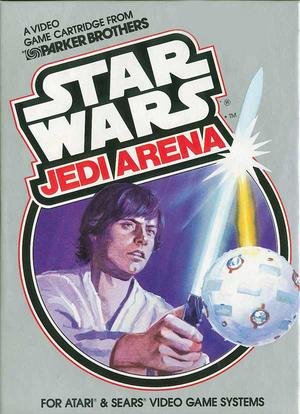 Finally, we end our trip through this train wreck of franchise history by heading over here to the Jedi Arena area. Jedi Arena is sad for a number of reasons, foremost being that it was made by Parker Brothers, who as I previously mentioned created the very playable and enjoyable (if simple) 2600 version of The Empire Strikes Back. While ESB chose to focus on an event that actually happened in one of the films (the assault on Hoth by the Imperial AT-ATs), Jedi Arena chose to give some sort of Mandalorian obscene hand gesture to the movies and set up a confrontation between two generic characters who the instructions claim are Jedi knights, but who actually appear as a couple of obese stick figures that stand in place while waving their schlongs at one another (without letting them touch, as that would be a little too, you know, homoerotic...) and occasionally suffering the indignity of being shot by the little remote training device that Obi-Wan used to train Luke in the ways of the Force on their journey to Alderaan. Note to the designers at Parker Brothers: Han was being sarcastic when he said that garbage was a really wonderful idea.

I think that's enough for now. Those of you who read and actually enjoyed this screed are welcome to comment on it, while those of you who think I'm being too harsh to the games on this list are welcome to join the Gonk droid in Jabba's torture chambers after which you will be cast into the belly of the almighty Sarlaac, where you will discover a new definition of pain and suffering as you are slowly digested over...oh, forget it. I'm going to kill zombies for a while. Leave a comment, eh?