To celebrate Fallout‘s 20th anniversary, I figured it would be fun to completely start from scratch and tool the Bethesda Fallout game series for new, fresh playthroughs. Since I have now spent an evening’s worth of catching up on, and customizing, each of the Fallouts, I figured I might as well put my lists out here. In fact, I have actually written an article on Planescape: Torment (hilariously obsolete today, with the new Enhanced Edition out) before, and it’s a ton of fun to share this type of info!

I’m personally a fan of a “soft touch” style of modding, so the purpose here was to create a list of

modifications that work to make Fallout 3 and Fallout: New Vegas more playable. Modding Bethesda games is pretty fun, as there are so, so many options. If you get too trigger happy, however, it can also be quite frustrating – much like the games themselves!

If you do want to follow this tutorial, either as your setup, or as a basis for adding on more modifications, for the purpose of playing and/or purchasing Fallout: New Vegas, I recommend the Steam Ultimate Edition version. Unlike Fallout 3, New Vegas works quite fine on Steam.

This tutorial operates under the assumption that you are on Windows, have all the DLC, and are running Fallout: New Vegas Ultimate Edition version 1.4.0.525.

Every Bethesda game modding process starts with the selection of a suitable mod manager. Although there are several good alternatives, Mod Organizer is, in my experience, by far the best application for the purpose today.

Mod Organizer is very powerful, reliable, and simple to use once you go through its built-in tutorial once. It has several key features: Most importantly, the program can be hooked to handle Nexus downloads. It also uses a virtual data structure that stores your mods in a separate folder from your actual game files, keeping your actual game installation pristine. This makes the installation (and uninstallation!) of mods very straightforward should you want to start from scratch.

For both Fallout 3 and Fallout: New Vegas, you will want to use the older Mod Organizer version 1.3.11 – more recent beta versions of the program (that support newer games, like Fallout 4 and Skyrim) unfortunately have some incompatibilities with the older games, and as such, I was unable to get them to work.

You will want to make a separate Mod Organizer 1.3.11 program folder for every game you plan to organize. In my case, this meant making two folders – one for Fallout 3, and one for New Vegas. The mods will be downloaded from Fallout 3 Nexus, and you will need an account. 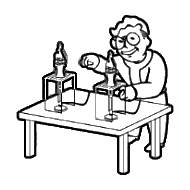 Note: Before doing anything else after installing the game, make sure to run the Fallout: New Vegas launcher (FalloutNVLauncher.exe) once, setting your graphics to “ultra,” as well as configuring your monitor resolution and aspect ratio. Once you have saved your settings, the launcher builds the necessary profile directories and files for you, including fallout.ini and falloutprefs.ini, which can then be modified directly through ModOrganizer.

For Fallout: New Vegas, the main patches are as follows:

It’s best to start here! The LAAE patch simply allows the Fallout: New Vegas .exe to use up to 4gb of memory instead of just 2gb on 64-bit systems, ensuring that there is memory available for mods. The patch is applied by running FalloutNVpatch.exe in your installation folder (i.e. \Fallout New Vegas\). The patched .exe also automatically loads NVSE if present.

Next, we need to install the foundation that other mod functionality, as well as game stability, is built on:

The first three are all installed into the main folder of your Fallout: New Vegas installation (i.e. “\Fallout New Vegas\”), not through Mod Organizer. I use the stable version of NVSE, 5.0b3.

The two NVSE plugins – stutter remover, and the anti-crash – are installed into the NVSE plugins folder in “\Data\”  (i.e., “\Fallout New Vegas\Data\NVSE\Plugins”). Make sure to read the instructions to get the .dlls installed properly. The stutter remover comes with its own .ini file, sr_Fallout_Stutter_Remover.ini, that can be further configured if you run into problems.

After the 4GB patch, NVSE, and its two plugins are installed, you can move on to Mod Organizer to install the JIP LN NVSE Plugin, which unlike the others should be installed there as well as be the first mod on your list.

Install or extract the Mod Organizer 1.3.11 build into a folder separate from your Fallout: New Vegas folder, and give it a suitable name – “ModOrganizerNV” or something akin to it, so you know which of your Mod Organizer folders is meant for which game. Make sure you run the program as an administrator for write permissions! After that, the program should recognize your Fallout: New Vegas installation. If you have never used the program before, allow it to teach itself to you by going through the built-in tutorial once.

Note: For Mod Organizer to launch Fallout: New Vegas properly, you need to make sure to do the following: First, under “Configure Profiles”, you need to check “Automatic Archive Invalidation.” This makes sure your mod content is actually applied in-game. You also need to make sure that in the right-hand “Archives” tab, all the main data files (Fallout – Textures.bsa, Fallout – Textures2.bsa etc.) are all ticked & selected so that the game does not crash at boot when these archives are missing.

There are also some .ini tweaks to be made. These can be done entirely in Mod Organizer (with Tools – INI Editor) as long as you previously launched the Fallout: New Vegas launcher, so that the required files were created. In my case, I settled for a few necessary tweaks; you’ll find a ton of other changes should you wish to tinker with the configuration more:

The installation order for modifications is often quite important, as mods are loaded one after another, with mods loaded later potentially overwriting either data in the main game files, or changes made by mods earlier in the load chain. There is a good rule of thumb: More important mods are loaded first, and newer and smaller mods are loaded later. If there is a conflict, Mod Organizer will tell you (with + and – symbols), and you can work out from there which mod you want to be the overriding one.

The first mods to install after JIP LN NVSE Plugin are a series of “unofficial” patches, in this order:

Then, we shall add some finesse to the UI, and the game’s basic feature set:

Each of these mods has a very specific purpose. The Mod Configuration Menu adds a new settings menu element to the game for configuring the settings of other mods, and UIO takes care of UI mods working together. Vanilla UI Plus is the most recent, up-to-date Fallout: New Vegas UI mod right now. It intends to improve and polish the existing UI rather than completely overhauling the interface.

Fallout 4 Quickloot … well, it makes looting quick. Enhanced Camera enables a visible body and player shadows. Animation Project, though a fabulous mod, is a bit of a problem case. It introduces sprinting (and a few neat perks) into New Vegas. Unfortunately, it has been taken down from Nexus by its developer, and Solid Project, the mod that it has now been merged into, requires you to install the latest NVSE beta (5.1b2 instead of 5.0b3).

Thus, Solid Project is incompatible both with a) the stable version of NVSE that we’re using and b) a mod we’re using (Fallout 4 Quickloot), which creates an unsolvable problem – unless, that is, we only install Animation Project. I also don’t think you need the Lazarus Project component of Solid Project for a mod setup of this type. Therefore, I simply recommend downloading Animation Project – it’ll work fine.

Our focus is on enhancing the game’s existing look rather than changing it. For this purpose, one would want to install the fantastic Flora Overhaul “Dead Version“. For better graphics effects, you’ll also want Impact, EVE, and EXE – loading in that order:

For lighting and LOD enhancements we want:

Clarity takes care of the yellow tint, and Interior Fog Remover comes with a fix to work with Clarity, so keep in mind to grab that as well. For the Enhanced Terrain LOD, which makes a huge difference, you need the “Vanilla ETL” package. The downside to the ETL package is that it takes approx. 16GB of hard drive space unpacked, but the upside is that it makes New Vegas look much, much newer than it actually is.

Finally, you’ll want to add some extra spice to the game’s graphics. The loading screens mod is especially worthy of a mention; the graphics have simply been upscaled with Waifu, with fantastic results:

We also want to take care of poorly defined collisions, and wonky physics in the game, with a series of mods in the following order, from oldest to newest:

Aaaand this is where we stop. Hands off! You can launch your game from Mod Organizer by selecting either NVSE or New Vegas from the program dropdown and pressing run. 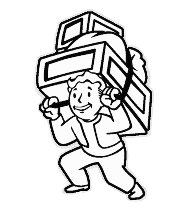 Obviously, there is so, so much more you can do; high definition texture packs, additional weapons, custom storyline content, new enemies and NPCs, nude models, and all kinds of wild ENB presets. Personally, this feels like the sweet spot between functionality and performance for New Vegas – not touching anything in the game’s lore, or the core mechanics, but with glaring issues, annoyances, and problems alleviated.

The point is this: No matter how many mods you pile upon it, New Vegas is never going to be the perfect game. It’ll always be a little wonky, a little weird, and a little unstable. Once you begin to pile on the add-ons, you’ll have to face the need for more problem-solving tools and situations.

For those that are either playing New Vegas for the very first time, or perhaps for the first time in a long while, these mods could, in my mind, be considered an appropriate cut-off point; after these, you’ll either start spending too much time modding and not playing the game, or beginning to change the core of the game so much that it no longer resembles the real thing.