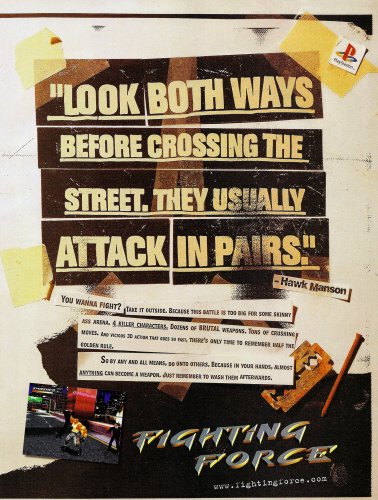 Today on Retrochick Retroblog, we're going to remind everyone why grammar is important, even when you're dealing with video games.

To wit: please open the image on your left. This is the second page of a two-page-spread ad for the PS1 game Fighting Force, developed by Core Design and published by Eidos Interactive. It comes from the Sept. 1997 issue of GamePro. I'm sure it ran in other magazines, I just happened to be reading this one when I spotted it. The first page contains an image of a guy holding a broken glass bottle, and some screenshots from the game, so it doesn't concern us here.

But this page does. When ad copy is written incorrectly, you get phrases like "skinny ass arena" which don't mean what the writer thinks they mean because somebody left out one teeny-tiny little important piece of punctuation.

The hyphen. That blink-and-you-miss-it dash just above.

What the writer should have written was "skinny-ass arena". Hyphenating "skinny-ass" means we're understanding that the word "ass" is attached to the word "skinny," and in this case is used to indicate the writer believes the arenas depicted in fighting games are not only small but also lame, unworthy, beneath contempt.

Without the hyphen, things change. We are left with the impression of an unusually narrow, butt-filled arena. An arena of asses that, for whatever reason, is skinny. The shorter side of a stadium at a monster truck rally, I guess? I don't know.

I'm reasonably sure that everybody who read this ad knew what the writers were intending to say (English grammar being remarkably pliable when it comes to things like this). At the same time, what they meant to say isn't what they actually said. Which made me laugh.

And then made me cry a little inside.