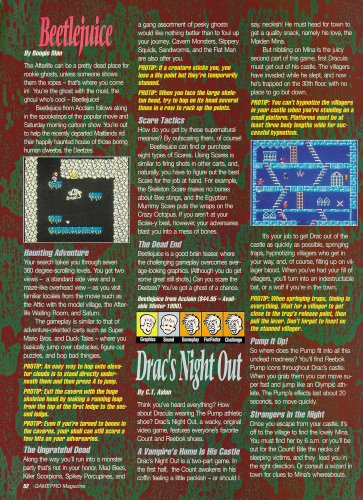 "It's Gotta Be The Shoes." With that five-word tagline, Reebok launched a sneaker fad for the 90's over which people went absolutely apeshit. And just as with every other great product innovation, there had to be cross-promotion. The Teenage Mutant Ninja Turtles ate Pizza Hut pizza, Modern Warfare soldiers drank Pepsi, Alan Wake used Energizer batteries in his flashlight, and vampires wore Pumps in that classic NES title, Drac's Night Out.

Consider Drac's Night Out one of the better casualties in the product placement wars. I mean, let's face it, there's no way in Transylvania a game boasting a protagonist clad in the most expensive athletic shoes produced at the time was going to be any good, right?

Depends on who you ask, I suppose. Opinion on the prototype seems sharply divided: some lambaste it for being crap, others embrace the fact that it's unfinished and consider what might have been. But now, thanks to the magic of Retromags and a copy of GamePro issue #15 from Oct. 1990, you can see why history and preservation is so important. Here's yet another awesome example of why gaming magazines rocked back in the day. The editors got to play works-in-progress, and their requirement of a multi-month lead time on their publication dates meant it was entirely possible for them to review a game only to have that game disappear or re-emerge as something completely different later on.

In any case, the object of Drac's Night Out is two-fold. First, one must deal with the interlopers who've decided to crash your castle. Once they've been murdered by your exceptional variety of traps, you move on to the next phase which is to take your carriage to town and find your true love Mina for a little midnight snack of the red variety. No, not Twizzlers. If you're really having problems in town though, there's a solution: strap on your Pumps, give them a couple of pumps for good measure, and suddenly you can run faster and jump higher than any vampire in history! Whatever happened to shapeshifting into a bat, transforming into a dog, or assuming mistform? More to the point, who had athletic shoes in 19th Century Europe? Nobody ever said video games were historically accurate.

So here you can see yet another reason to comb through the annals of gaming yesteryear. I certainly never knew Drac's Night Out was planned for release, and would have had no reason to go searching for information on it had it not been for this article.

Have you unearthed any long-buried secrets from your time spent browsing through the Retromags archives? Why not tell us about them on the forums! We'd love to hear about your finds.