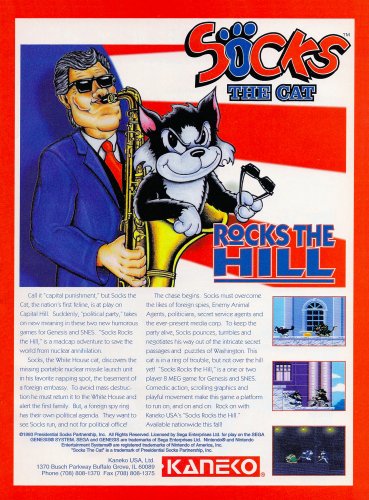 Remember Socks? He was the black and white feline counterpart to former US President Bill Clinton. Children everywhere used to write letters to Socks (and his canine bro, Buddy); the best of these got collected and published in a book entitled, "Dear Socks, Dear Buddy." Everybody loved the First Pets, so what better way to show your appreciation for all their trials and tribulations around the White House than to immortalize one in a video game?

So somebody at Kaneko has this bright idea for a video game starring Socks. Upper management does their round table discussion thing, and out of all the other ideas you know were being tossed around, this one was voted 'Most Likely to Succeed' and given the green light. What was it up against, the audio designer's son's idea for a game starring an anthropomorphic popcorn kernel who "puffs up" to fight evil with his extra-buttery powers?

Wait a minute, that's not a bad idea. Anyway, anyway, where were we? Oh yes, Socks.

Now if the story ended here, it would be totally understandable. Video game concepts are born, struggle and die slow, horrible deaths every single day. For every game that gets a complete, finalized release, there are probably between five and ten that get cancelled sometime between the concept and initial development phases. And if that's what had happened to Socks the Cat Rocks the Hill, then this would be no more interesting than reading about other games that never made it to the shelves. Think The Cheetahmen II, or...you know, on second thought, don't.

Here's the thing though. Socks the Cat Rocks the Hill was planned from the start to be a political parody, not just another "me too" cash-in on the 2D platformer market. The First Cat has to dodge shifty politicians and battle bosses designed to look like past political figures like Richard Nixon, Jimmy Carter and even presidential hopeful Ross Perot so he can get to POTUS in time to warn him about stolen nuclear weapons? Hellfire and damnation, this might have worked!

Not only did this game get the green light, not only did it get ads in prominent gaming mags of the day (this one's from the January 1994 issue of GamePro), not only did it have completed box artwork, but it was finished. Done. Completed. It went gold. This sucker was locked, cocked and ready to rock, a fully-loaded 16-bit saga waiting to blast off on the Super NES, with reviews in GamePro, EGM and even Nintendo Power which overall gave it a slightly above average rating.

Then Kaneko said, "Sorry guys, no more USA division." They closed up shop, headed back to Japan, and left poor Socks high and dry. Not surprisingly, no other US publishers stepped in to save the venture leaving US gamers to wonder what happened to that game about the President's cat.