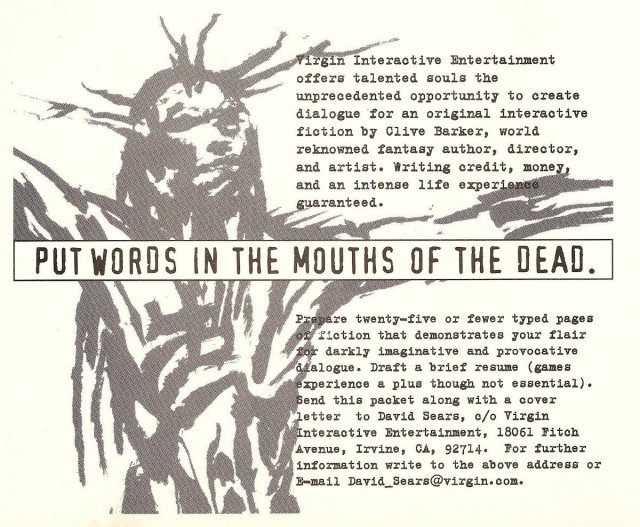 Magazine demographics often come into play when deciding what ads agencies will submit to a particular publication. In the case of this ad, which came from the very first issue of Next Generation magazine in 1995, their attempt to reach an older, more mature audience meant they got stuff that wouldn't fly in the pages of EGM or GamePro, which were targeted at a younger teenage audience.

Check this out though: that's an offer to write a horror fiction story for a video game inspired by Clive Barker, to be published by Virgin Interactive. In 1995, Virgin OWNED the graphical adventure market thanks to "The 7th Guest" and its sequel, "The 11th Hour". These were two of the best-selling CD-ROM games of the 1990s, and the opportunity to earn writing credit for penning a tale for a Virgin-published game would have meant near-instant celebrity.

Alas, despite the ad's lofty promises of an intense life experience, it wasn't meant to be. So what happened here?

The ad doesn't mention the game-to-be by name, but with a little detective work we can narrow it down. There were a lot of games involving Barker's writing or his properties (Hellraiser, etc...) that never saw the light of day, but Virgin Interactive was set to publish only one game involving him: Ectosphere.

Barker's presence in comic books was growing by leaps and bounds in the mid-90s. He was writing for, or licensing his stories to, Marvel, Dark Horse, Eclipse, and HarperCollins at various times. One of those comics was Ectokid, written for Marvel Comics under their Razorline imprint (an imprint created just for Barker, I might add).

Ectokid's nine-issue run tells stories of Dex Mungo, a fourteen-year-old boy with a unique gift (and curse). Dex's eyes don't work quite right. His left one's just fine: when he looks through it, he sees the real world, the same as you and I do. But his right eye sees beyond reality, into the spirit realm. To help him get through life, Dex wears a patch he slides from eye to eye depending on which version of reality he wants to view. Most of the stories in this line weren't written by Barker, but by other talents in the comic industry at the time (trivia note: Matrix creators Andy and Larry (now Lana) Wachowski penned five of them).

Imagine the possibilities for a horror adventure game designed with an interface where, with the click of a button, you could "slide the patch" and reveal a completely different world. Properly handled, Virgin could have published something that made their previous hits look like ziplock baggie distributions from the 1980s.

So what the Hell(raiser) happened? I have no idea, and neither does anybody else according to my research. Virgin applied for a trademark to the Ectosphere name in 1994, but the trademark is now considered abandoned due to non-use. Every reference to the game I've found simply labels it "unreleased" and there's nary a screenshot or box picture to be found.

One other lingering question remains: since it's unlikely Virgin didn't get any response to this ad, who eventually won the position? My best educated guess would be David Sears. You may not know him by name, but Sears' first game-related job was co-adapting Harlan Ellison's story, "I Have No Mouth, and I Must Scream" to the PC adventure market with Ellison himself (and a fine job they did too). He went to work for Virgin Interactive afterwards. He's also been the creative director behind the first three SOCOM games on the PS2, MAG on the PS3, and Fireteam Bravo on the PSP.