As the saying goes, better late than never. In this case, it's just because I found out about it, it's on Friday the 23rd, and thus I have way, way less than 24 hours to write this post about why you wish that you lived in Minnesota right now.

"Be excellent to each other." It was good advice when Bill S. Preson, Esq. & Ted Theodore Logan gave it to us back in 1989, and it's especially good advice today. Because in this case, being excellent means kicking out the jams and pulling out all the stops for a major charity event that combines rock music, video games, raffle give-aways and some killer prizes the likes of which any gamer worth his or her Achievement Points would sell one or more insignificant body parts to win.

The full story can be read at the event's website, Be Most Excellent.org. The charity event, being held in Minnesota, is a double-benefit which goes to help Child's Play Charity and Children's Hospital of Minnesota. Everything is set to go down at the 501 Club in Minneapolis from 7pm to 2am, and anybody who is local (and who is over the age of 21) is urged to go and check it out. Again, my apologies for the complete and total lack of advanced notice...I just learned about this about an hour ago (Lisa Mason, if you're reading this, thank you again for letting me bother you!) 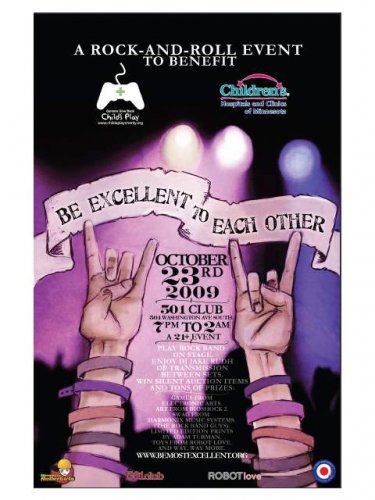 OK, so what's going to happen besides there being an awful lot of drinking and partying? Well...can you say...ROCK BAND? I knew you could. You play it in your living room, right (or maybe your basement for those who are more conscious of their lack of volume control)? Well, just imagine what it would be like to play Rock Band on an enormously-epic stage, in front of a bunch of other gamers who don't even know you and will probably have great fun laughing at your expense every time you botch a riff or completely fail to hit that high note. Wouldn't that be...well...excellent?

You're damn right it would be.

Now...in case you needed any other reason to show up or just send money, you should know that some seriously heavy hitters in the gaming industry are throwing their wares into the mix. Maybe you'd like to win some EPIC Square Enix swag? What about a Kill Audio figure signed by Claudio Sanchez? Or maybe Prince of Persia is more your cup of tea? Maybe you just like lots of really sharp pointy things. What about some fully-inked comic book artwork, free movie passes, Sega games, or some excellent pizza? I mean, for crying out loud, what's not to like here?

The point is, whether you go or not, whether you win or not, this is an amazingly awesome event, put on by gamers, rockers, and other uber-geeks looking to send a little video game love (and some cold, hard cash) to two excellent and deserving charities. So tell your friends about it, especially if you live in the Minneapolis area or know people who do.

The tagline for BEtEO '09 is, "We rock, the kids win. And if we do it right, they'll win big." And this year, when the economy still has a long way to go towards recovery, and there are children who are stuck in the hospital (which is about the most boring place in the world outside of Moab, Utah no matter which hospital you're stuck in), why not do something that will ultimately go towards helping them pass the time while they are there? Imagine a Halloween without video games...now that's scary.

Think of it as earning a Platinum trophy or Achievement in life this October. And even if you can't make it, go to their website and send them a comment just to let them know what a great job they're doing (tell 'em Areala sent you...who knows, that might be their secret passphrase or something).