Yes, you read the title correctly: 'Survival Horror without the horror.'

"What the hell are you talking about, Areala?"

Glad you asked. You'll note that if you remove 'horror' from 'survival horror' you are left with just one thing: survival. And while this description could apply to a great many games since nearly every video game has "not dying" as one of its prerequisites for winning, there's something to be said for a game that tries to take a different approach to things. Disaster Report is just one such example. 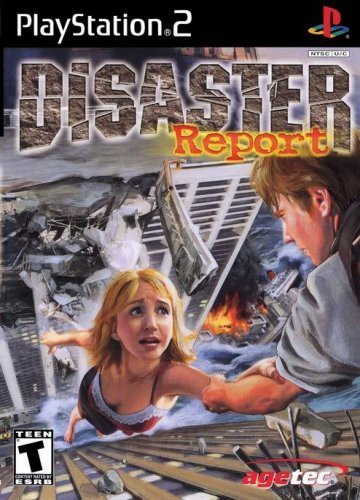 Irem and Agetec are known for developing and publishing a number of often-quirky titles that are all too often consigned to the bargain bins without being given the chance to succeed. Sometimes, this is well-deserved (DT Racing and Felony 11-79 spring to mind as obvious contenders). Where Agetec usually succeeds wildly though is their desire to publish offbeat Japanese games that otherwise would never see the light of day outside of Japan. We have them to thank for the fantastic Armored Core series, for instance, as well as the phenomenally underrated Clock Tower on the PS1. Agetec specializes in the sorts of things most other Western publishers won't touch with a ten-foot pole, so it's only natural that they snapped up the rights to "Zettai Zetsumei Toshi" and released it in the US as Disaster Report, while Eurogamers would know it as "SOS: The Final Escape". And the concept is quite simple: you have to survive.

It's the year 2005, and man has turned to creating artificial landmasses in the oceans to help combat the burgeoning overpopulation problem that plagues the planet Earth. Stiver Island was a dream come true, a masterful feat of engineering that suspended and entire metropolis (the somewhat blandly-named "Capital City") above the waters of the Pacific. Capital City attracted people from all walks of life, including Keith Helm, a Joe Everyman who has come to Capital City to be the editor for the local newspaper. Keith never manages to make it to his first day on the job, though, as while he's travelling to Capital City, disaster strikes. An earthquake measuring 6.0 on the Richter scale rocks Stiver Island, demolishing buildings, smashing railroad tracks, collapsing roadways, and undermining the structural integrity of the island itself: Stiver is now slowly singing into the ocean! Keith wakes up a short time after the initial quake, laying in an abandoned train car, feeling the aftershocks. Now, you get to play Keith, the star of your own disaster film, and see if you have what it takes to survive the catastrophe.

This means using your wits as opposed to using your fists, because Disaster Report isn't teeming with zombies, aliens, spectral abominations or any other form of evil creature. It's just you against nature, in a race against time to get off Stiver Island before the ocean consumes it entirely. To do this, you'll have to get help from some of the other survivors you'll run across, use ordinary, everyday items like ropes, helmets and bandages to traverse dangerous areas of the city, and avoid falling to your death, getting crushed by buildings, or even overexerting yourself and dying from dehydration.

One of the nice things about the game is that despite the presence of an AI companion throughout most of it, you never find yourself getting upset about it. The AI characters are smart enough not to go falling off ledges, and mercifully have no health bar so you need not concern yourself with their personal well-being. Think of Ico and Yorda's AI relationship in Ico, and you'll understand what I'm talking about.

The save points used by the game are water fountains, which serve multiple purposes. First of all, you can save your game at one. Second, you can drink water from them to replenish your dehydration meter. Overexert yourself by running and jumping everywhere, and you'll dehydrate. Lose enough hydration, and you start burning through hit points until you collapse. Third, though, you can help prevent your untimely demise by using the fountains and spigots to fill any stray bottles you may have found with untainted drinking water, perfect for giving you a boost any time you need. It's a unique system that doesn't overcomplicate things, but adds just a little bit of resource management stress. You'll feel far more stress from the knowledge that space in your backpack is limited, so gameplay sometimes comes down to deciding what you can throw away and what you should keep. Just like a real disaster, anything could be useful, and anything could be worthless...it's all up to you what you take.

Finally, while the game's story never really changes, the game does sport some serious replay value because how you respond to the NPCs you meet along the way will ultimately determine the ending you receive. The plot branches at one point, allowing you to follow one of two primary NPCs, and this too will affect the outcome of the game. It's a neat little addition to the game, making your decisions and tone actually mean something instead of just being there for flavour.

On the down side, Disaster Report is pretty easy despite having two difficulty levels, and the graphics are nothing to write home about. The characters look like upscaled PS1 models, and the surrounding areas of the disaster zone are all well-laid out but blandly rendered. Cut-scenes are all rendered using the in-game engine, so don't expect to see the visuals improving either. In a game like this, the graphics aren't the be-all, end-all of the experience, but it still seems that a game released in 2003 for the PS2 should look better, and it's a shame this doesn't.

On the other hand, it would be wrong to condemn the game for graphics alone, because it's so darn good at doing everything else that it sets out to do. The storyline stumbles a couple times, introducing a conspiracy sub-plot that seems completely out of place (I'm sorry, but if the island I am on is slowly sinking into the ocean and succumbing to structural failure, you might forgive me for just wanting to get the hell to a helicopter instead of wandering around trying to make sense of why this earthquake hit), but the fact that the game watches how you interact with the other survivors and lets the plot branch to follow the one you choose to help serves to offset this.

Most importantly though, Disaster Report is fun. It's a survival game that can genuinely make your heart beat with the stress of trying to get your character across the exposed support beam before it snaps, or trying to outrun the giant stone globe that has broken off the top of a fallen skyscraper and is now heading in your direction. Puzzles are more of the cerebral, 'how-do-I-get-there' variety as opposed to the 'which-random-item-in-my-inventory-do-I-use-now?' sort, and the game is very generous with putting you back just a few steps away from where you died should the unthinkable happen.

Two sequels have been made to Disaster Report. The first was released in the US as Raw Danger for the PS2, the second was just released in Japan for the PSP and so far there don't seem to be any plans to localize it anywhere else in the world. So that's the bad news. The good news is that the PSP is region-free, so only the language barrier is preventing you from playing it right now.

So, best game ever? Hardly. But that's not what this blog is here for. If you're a bit tired of blowing zombies in half, if you'd prefer to be able to close your eyes without seeing scary black-haired Japanese girls, or if you can't bring yourself to chainsaw one more mutant but you still want all the adrenaline-pumping excitement of a good disaster flick without having to pay $11 to watch 2012, Disaster Report will foot the bill quite nicely (a used copy cost me a whopping $5 at the local GameStop, instructions and all).